The intercom rang inside the Memorial Hospital Critical Care Unit and Taylor Freedline watched everyone around her pause. The Bethel University graduate, who was working on clinicals to finish nursing school in March, listened to the announcement they anticipated hearing sooner or later: Memorial Hospital had its first COVID-positive case. 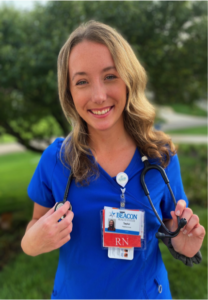 “I will never forget that moment,” Freedline said, because it is the moment everything changed. Months prior, no one would have imagined that nursing students like her would be graduating and starting their careers during a global pandemic.

After graduating from Elkhart Memorial High School in 2016, Freedline decided to stay close to home and study nursing while playing tennis at Bethel University. From a young age, she knew she wanted to be a nurse and take care of people. As a child, she would pretend her dolls were sick and help them get back to full health.

That passion continued all the way through high school and helped her choose her career path.

“I’ve always had a desire to serve others,” Freedline said. “I think there’s no greater joy than touching someone’s life.”

Her desire to serve others drove her to want to work in Elkhart General’s critical care unit. The COVID-19 pandemic, however, prompted Freedline to reconsider her place in the hospital setting. After all, she still lived at home with her aging parents.

But after seeing the level of preparation and safety measures in place at Elkhart General, she ultimately decided she wanted to remain in that unit after graduation, caring for the sickest of patients. This included caring for COVID patients.

The highlight of graduating from a Nursing Program is the Pinning Ceremony. Due to COVID and the necessity for social distancing, many schools were not able to have a pinning ceremony for the new graduates. A pinning ceremony for nursing students is the official initiation as a nurse, and is often more meaningful than a graduation ceremony. For it to be cancelled, has been tough for Freedline.

“Originally it was rescheduled, but now that it’s officially cancelled, it is really disappointing,” Freedline said. “After all the work, the pinning ceremony was the light at the end of the tunnel and something we were all looking forward to.”

While working at Elkhart General, Freedline has worked with COVID patients and learned how to care for them during a normal day. Assessing patients, coordinating team activities, working with ventilators, and proning patients are just some of the things she has learned so far.

Working in a hospital can be stressful but Freedline says she is grateful for every opportunity she gets to help people and make a difference in a vulnerable moment in someone’s life. “Being on the front line has made me realize to never take life for granted.”

“My professional goal for the years to come is to commit myself to lifelong learning in the nursing profession,” she says.

For first time nurses, starting a career during a pandemic is nothing they could have imagined, but for Taylor Freedline, she is using the opportunity to learn and do what she loves, helping people.

What to know and where to go.

Receive the latest updates and information